Rory Hamill later described it as a moment of clarity. A moment when the image of his children flashed through his mind. Sitting in a Walmart parking lot, the 31-year-old Marine Corps veteran lowered the .40-caliber pistol from his head, disassembled it, and threw the pieces away.

Rory, who lost a leg to an improvised explosive device in Afghanistan, spent the rest of his life advocating for veterans struggling with mental health issues. Using his own story as proof that redemption is possible, he strove to normalize mental health issues that plague many of those who have served and end the stigma associated with post-traumatic stress. Through his posts, speaking engagements, and interviews, he became social media famous within the veteran community and beyond. But his quest to be the face of veterans who take control of their personal demons, though noble and heroic, ultimately backfired.

Popular campaigns to raise veteran suicide awareness, such as the 22 Pushup Challenge, are not solving the problem. They seem to have actually made it worse. A study published last year by Brown University found that 30,177 veterans and active-duty service members of the GWOT generation have committed suicide — a staggering number, especially when compared with the 7,075 Americans killed in support of post-9/11 conflicts. Suicides now account for four times the number of deaths as those in combat operations over the last 20 years. And according to the USO, there has been an even bigger spike in suicides in just the last five years. Furthermore, once an almost exclusively male problem, veteran suicide is now a crisis for both sexes. In the last decade, women have made up an increasing portion of suicides among military service members — the percentage has nearly doubled. The problem has grown so desperate, in fact, that the VA recently announced Mission Daybreak, an initiative that will grant $20 million to innovators who can come up with a solution to stem the flow of suicides.

What explains these trends? There is, of course, no single answer, but a growing hesitation to condemn the act of suicide for its selfishness is certainly not helping. To put it more bluntly: Suicide has spread like a disease among American military veterans, and we as a community are only exacerbating the crisis by refusing to criticize those who choose self-inflicted death as their final act in life.

Rory was one of those who made that choice. In May of 2020, two years after his moment of clarity, he was dead, his skull emptied of the brain that once held those images of his children. He had placed that familiar combination of metal parts inside his mouth and applied that practiced slow, steady squeeze for the last time. One final act of deadly force, a momentary mixture of equal parts courage and cowardice, tragically ended his short life.

Rory’s death was just the latest in a long line of Marines from my battalion who survived combat only to kill themselves. Another Rory, Rory Dalgliesh, one of the funniest people I have ever met, shot himself in 2013. Two years later, Justin Walker, a member of my platoon who once volunteered to steal six cakes from a supply truck when we were without MREs, went to a shooting range, rented a rifle, and shot himself in the heart. Brian Terra, a well-liked machine-gunner, also took his own life. So did Daniel Salter, Paul Oliver, Michael Harris, Adam Wolfel, Jared Paynter … the list goes on. 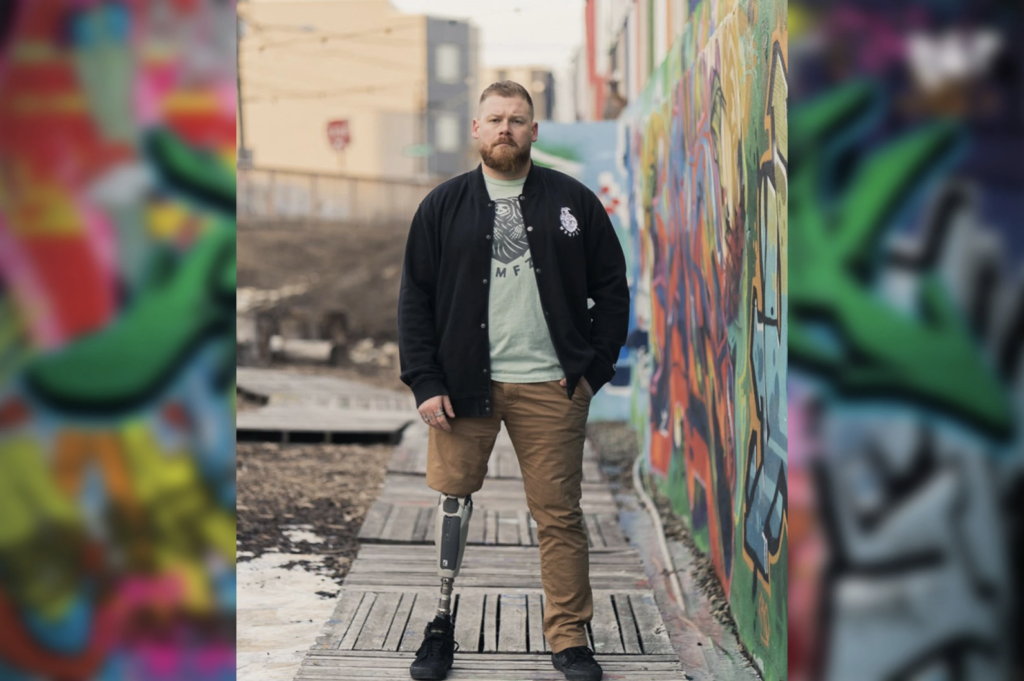 Rory Hamill dedicated the final years of his life to helping veterans struggling with mental illness. Photo by Paul Alkoby, courtesy of Instagram.

There was a time when suicide was taboo. It used to be condemned as an act of cowardice. Now it has become so ordinary that veterans can think of killing themselves as a viable option for postwar life, wedged somewhere between entrepreneurship and homelessness. The obvious cons of such an irrevocable choice (inflicting permanent pain on those you love and, of course, death) are obscured by blustery rhetoric and mythmaking. Now, when a veteran commits suicide, an army of former comrades and virtual acquaintances will inevitably hoist him up alongside service members killed in combat. Some people have even taken to wearing the names of those who kill themselves on memorial bracelets like those once reserved for comrades killed in battle. Droves of people share pictures of the deceased during their glory days, wax poetic about seeing them again in Valhalla, and gush about how their decision to commit suicide was tragic yet somehow understandable.

In our efforts to stop veterans from dying by their own hands, we have worsened the problem. Pushups and T-shirt lines have loosened the proverbial tourniquet and released the severed artery of self-inflicted gunshots.

Condemning a person’s decision to commit suicide does not mean condemning their character. This is an important distinction. Suicide, regardless of how well the person lived, is a choice that needs to be removed from the list of acceptable options. When someone decides to end their life, they are taking the burden of their pain, magnifying it, and placing it on the shoulders of those who love them most. That goes against everything service members stand for. Criticizing those who kill themselves does not mean we don’t love them. It does not take away from the great things they did in life. It does not mean they are forever a coward or a villain. But their final choice is ultimately a selfish act.

I’ve lost more than one of my personal heroes to suicide, and criticizing them in this way feels wrong. However, I have come to realize that it’s necessary. One month before I left the Marine Corps, my grandfather, a career Navy veteran and hero of mine, shot himself in the temple with a revolver. He lived just long enough to stumble from the garage and collapse on his front lawn. Following his death, all I wanted to do was sing his praises and ensure the rest of the world knew how great a person we lost, but it’s now clear that this is a disservice and only raises the likelihood of someone else’s hero choosing the same irreversible path.

The pain caused by suicide is what we need to highlight so that those still living are forced to acknowledge the gaping, untreatable wound it leaves behind. We need to stop equating killing oneself to dying in combat. They are not the same. “They died of invisible wounds” or “they brought the war home with them” are clichés that only serve to excuse the act of suicide, and in turn glorify it. The 22 vets killing themselves daily are not simply reliving a single traumatic experience over and over until it kills them. The causes for suicide are deep and varied, yet we talk about it as if it were just a natural side effect of service.

It is our fault. Veterans heap glory upon those who kill themselves much as we do for those who die at the hands of the enemy. While no sane warrior wants to die in combat, it is, at the very least, a comfort to know that if you die in battle, your friends will honor your sacrifice, hail you as a hero, and bury you with honors. Your comrades, family, and country will collectively respect your sacrifice. As the fictional Gunnery Sgt. Hartman of Full Metal Jacket says, “Marines die. That’s what we’re here for. But the Marine Corps lives forever, and that means you live forever.”

The promise of immortality is comforting. The same comfort should not be extended to those contemplating suicide. Time and again we see a suicide immediately followed by an outpouring of stories celebrating the dead warrior’s battlefield exploits, which potentiates the risk of copycats. We then go on to swear their death will not be in vain and bury them in flag-draped coffins as if, in their final act on earth, they dove on a grenade to save their buddies rather than the reality — that they spent their final moment sitting alone in a Walmart parking lot with a pistol in their mouth. We are all complicit in this misdirection. Our efforts to place meaning on the wasted lives of the warriors we’ve loved have resulted in the deaths of more.

READ THE FULL ARTICLE ON COFFEE OR DIE MAGAZINE