‘LOVECRAFT’S IRAQ’: RECON MARINES FIGHT FROM FALLUJAH TO THE MOUNTAINS OF MADNESS

Since leaving the military 16 years ago, David Rose has locked people up as a police officer, gotten himself placed on house arrest (anklet GPS and all), fought Muay Thai professionally, been committed to a VA psych ward, contracted in Afghanistan, broken onto the literary scene with a successful memoir, written award-winning poetry, and created a fictional world approaching the depth of Middle-earth. And now, he’s welded the world of weird fiction with that of the Iraq War. He lives somewhere in Florida’s version of Cajun Country — surrounded by swamps — and is probably the FBI’s No. 1 suspect for the real identity of Florida Man.

I first met Rose in 2016 on at a poetry tour stop that more closely resembled a punk concert. The former Recon Marine was in good company on the Versus and Curses Tour, joined by former Army Ranger Leo Jenkins and Marine veteran Justin Eggen. The trio went on a road trip across the East Coast, sharing poetry born of their time fighting in the Global War on Terror. From strip clubs to dive bars, the only stop along the tour that didn’t put attendees at risk of catching hepatitis was the Marine Corps Museum in Quantico, Virginia. It was also the stop closest to my home. So out of sheer convenience, I met Rose at the Crossroads of the Marine Corps: a fitting rendezvous for two Marines who served brief stints as cops before making livings banging away at keyboards.

Pushing 40, Rose looks like the frontman for a 1980s rock band, complete with faded sleeve tattoos and a black — leaning toward gray — goatee. His eyes have a hard edge missing from the gaze of most musicians — a permanent squint, perhaps left over from enduring Middle Eastern sand storms in a HMMWV turret. Picture Tommy Lee, if the Mötley Crüe rocker had spent his youth behind a rifle and a slew of Jacksonville women instead of a Pearl drum kit and Pamela Anderson.

Six years after discussing war poetry with Rose in Quantico, I heard whispers that he was finally combining his gift for telling war stories with his obsession for strange tales, so I wasted no time tracking down the Lou Reed of GWOT writers for a phone call. 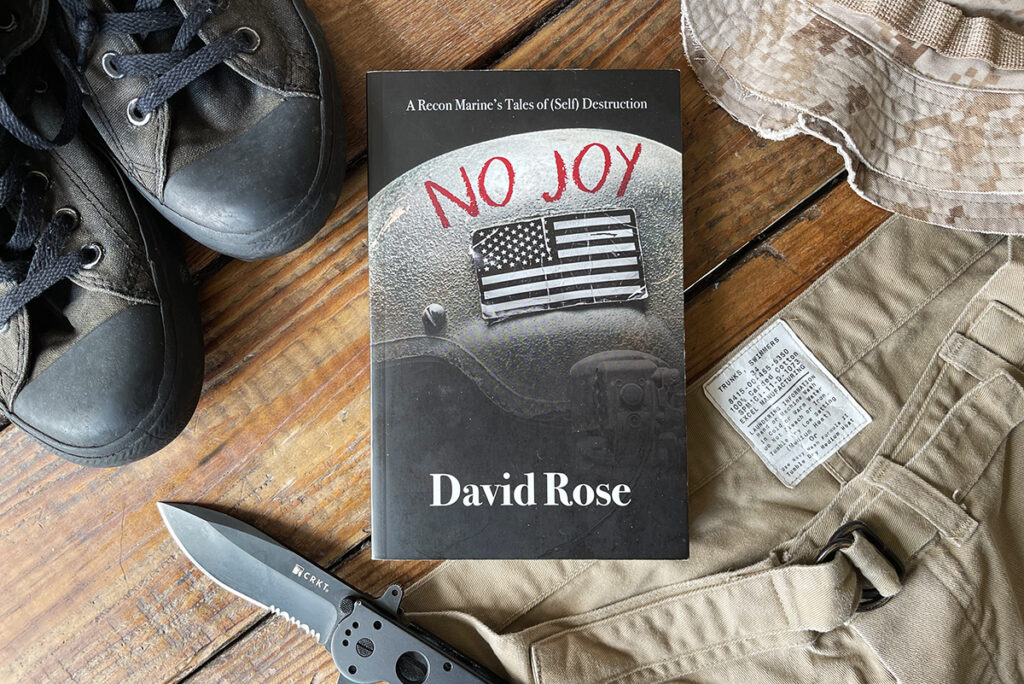 It’s an unorthodox war story that pits a team of Recon Marines — still recovering from the bloodletting of Operation Phantom Fury — against an ancient evil that plagues the battlespace. The elite team of Marines must reorient their weapons on sinister powers older than the world itself.

Mixing H.P. Lovecraft’s mythical monsters with war-torn Iraq might seem like a strange choice for a book, but after all, Rose is a strange dude. Most people might take a defensive step back if you called them strange to their face, but Rose would smile. He’s made a successful living embracing the weirder side of his mind. His first book, No Joy: A Recon Marine’s Tales of (Self) Destruction, garnered immediate attention among military readership. Described as a “counterweight to all the politicized and ghost-written books about the Global War on Terror,” No Joy reads like a collection of Hunter S. Thompson essays, if the ether-addict had served in 2nd Recon.

READ THE FULL STORY AT COFFEE OR DIE MAGAZINE