Eleven photographs. That’s all that exists of the Allies’ first-wave assault of Normandy’s beaches on D-Day: the free world’s monumental effort to liberate Western Europe from its Nazi plague. It was the largest amphibious invasion ever conducted, but just 11 blurry black-and-white photos of American soldiers desperately wading through the obstacle-filled surf toward Omaha beach survived. The images were captured by Robert Capa, the daring and dogged Hungarian-born photojournalist and war correspondent who documented some of the most violent and chaotic operations in World War II’s European theater. Capa took more than 100 photos during the Normandy assault, but most of his film rolls were lost during the violence and chaos of the operation.

Born Andre Friedmann in Budapest, Hungary, in 1913, Capa migrated to Berlin in 1930. He studied journalism and served as a darkroom assistant there until the Nazis came to power in 1933. Capa, who was Jewish, left Germany for Paris, where he shared a darkroom with acclaimed French photographer and artist Henri Cartier-Bresson and the Polish-born photojournalist David Seymour.

Capa was working for Life magazine when he was assigned to cover the colossal invasion of Normandy. Notified just one week before D-Day to pack his gear and board one of the 5,000 ships bound for France, Capa was no stranger to conflict journalism or photographing war. He documented the Spanish Civil War alongside Ernest Hemingway, capturing some of the most iconic images from the conflict. In 1938, he covered the Japanese invasion of China, and he joined American paratroopers during the invasion of Sicily in 1943, documenting the Allied operation along with Ernie Pyle.

In the early morning hours of June 6, 1944, Capa waterproofed his essential equipment: four cameras and a single telephoto lens. At 6:30 a.m., the first wave of troop landings commenced, and as soldiers from E Company, 2nd Battalion, 16th Infantry Regiment, 1st Infantry Division, slammed their bodies into Hitler’s “Atlantic Wall,” Capa waded ashore on the heavily defended “Easy Red” sector of Omaha Beach, capturing and preserving the historic events. The “Magnificent 11” captured the insanity Americans experienced as they climbed out of the English Channel and into history.

Among the photographs, there are no crisp, posed images with perfect subject placement or beautiful lighting. There are no clear expressions that evoke deeper meaning or stand as works of art; just movement and confusion. If they convey one dominant message, it’s chaos.

Without Capa’s 11 frames, the world’s memory of the Normandy landings would be different. There would be no Saving Private Ryan — a film that provides the basis for many young people’s understanding of D-Day. Janusz Kamiński — the film’s director of photography — drew directly on Capa’s D-Day photos to re-create the film’s dramatic 24-minute second scene.

“Robert Capa’s war photography was one of the guiding references for the film. […] In Private Ryan, I wanted to take a major Hollywood production and make it look like it was shot on 16mm by a bunch of combat cameramen,” Kamiński told American Cinematographer magazine.

Taken eight months after Capa landed in France, Joe Rosenthal’s iconic photograph of the American flag being raised atop Mount Suribachi ignores the violence that raged around that brief moment. The image screams of victory and evokes pride in America’s indomitable fighting spirit. It overlooks the cost of that fight and says nothing of the fact that, even among the six Marines frozen in time, half were killed in the following days.

Capa’s photos of D-Day capture no such moment of inevitable victory or American military might. Instead, the Magnificent 11 tell a grittier, more complex war story.

Of the 11 surviving photographs, one stands out: a blurry image of an American soldier, burdened with soaked clothing and equipment, struggling to wade ashore. The image is notable for the fact that Capa had to advance in front of the man, turn around, and expose his back to the direction of enemy fire in order to get the shot. It is the only one of Capa’s D-Day images that shows an individual face. But by moving ahead of the soldier and taking a photograph of his face, Capa humanized the entire invasion force of 156,000 men. 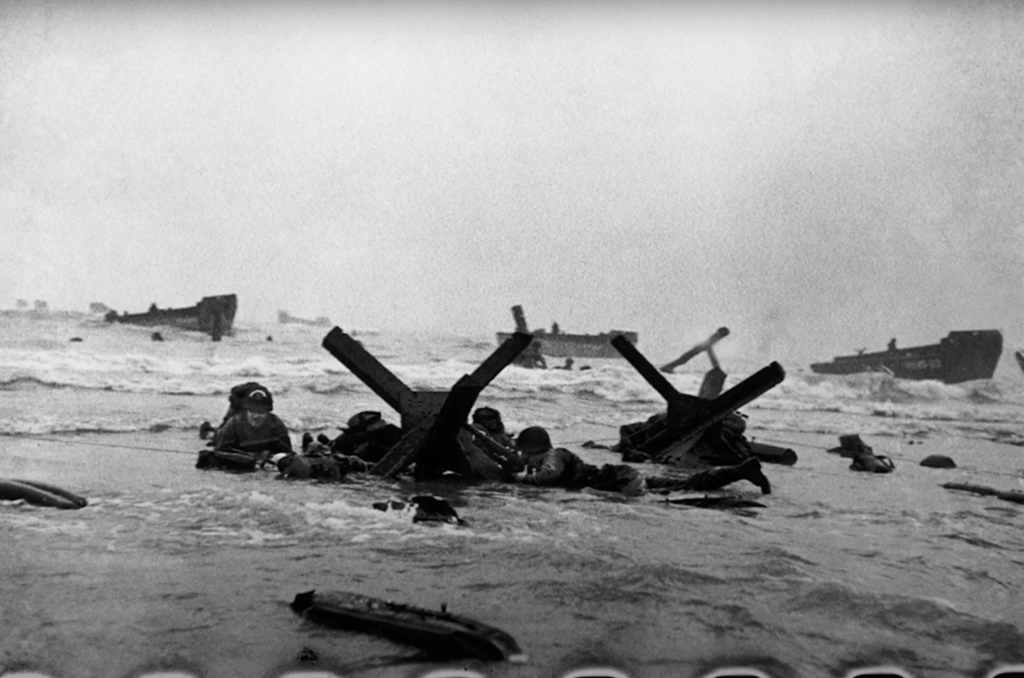 Capa continued to cover the Allied advance across Europe. In May of 1945 — just after Germany’s unconditional surrender — Life published his photograph titled “The Picture of the Last Man To Die.” The photograph depicted the body of Pfc. Raymond Bowman shortly after he was killed by a German sniper during the battle of Leipzig. Though Bowman was not actually the last American to die in Europe, Capa’s photograph again succeeded in capturing a bigger truth: the tragedy of every war’s final casualty.

In 1947, Capa, Cartier-Bresson, Seymour, and George Rodger founded Magnum Photos, the powerhouse cooperative photography agency whose members include some of the greatest photographers in the world — past and present. After the war, Capa joined John Steinbeck in the Soviet Union to document life there.

In 1954, Capa embedded with French forces in Vietnam to cover the First Indochina War. On May 24, the unit he was with came under enemy fire, and — as he did for his photograph of the American in the French surf — Capa moved ahead of the soldiers so he could turn around and photograph them maneuvering under fire. While moving forward, Capa stepped on a land mine. The blast severed his leg and left him with a fatal chest wound. He died while being evacuated to a field hospital. He was the first American war correspondent killed in Vietnam.

READ THE FULL ARTICLE ON COFFEE OR DIE MAGAZINE